Those of you who are using CRM 2011 Online or CRM 2011 On-Premise (rollup 12 or higher) will be slowly getting used to the new process forms for the Account, Contact, Lead, Opportunity and Case entities. These process forms show off the new “flat UI” which is designed to let users work with data in a whole new way. The forms are less heavy and load much faster than the old forms, and with CRM 2013 comes process forms for all entities, including custom ones! They really are everywhere!

To begin, let’s talk about the form layout and the various controls that are available. Firstly, we have the new command bar which replaces ribbons on forms and grids. The command bar is contextual and displays options to the user based on the entity they are working with. For example, the image below shows what the command bar looks like when creating a new Task record.

Notice how simple it is compared to the Task ribbon in CRM 2011. Even though a lot of these ribbon buttons are disabled, they can still draw attention to the user and create confusion when working with CRM.

To the right of the command bar, we have the familiar “previous” and “next” record buttons. For those heavy CRM 4.0 or CRM 2011 users, there is also the option of popping the current record into its own browser window.

Next, we have the header tiles which are defined by the first four fields you add to the header on an entity form. Again, let’s have a look at the Task entity as an example.

These tiles clearly show important information about the Task and catches the user’s attention. You can also click on these tiles to change values if the Task is still active. Clicking on the Priority tile presents an option set with available priority values.

CRM 2013 also improves field validation on forms. In previous versions of CRM, we would only notice that required fields had not been filled in if we attempted to save the form. We now have inline field validation so we can easily recognise the data in the Subject field is missing.

Lookup fields have also been improved by displaying results without any popups. For example, when trying to set the Regarding field for the Task, I can simply click on the lookup icon and CRM will let me choose from a number of Accounts in the system. 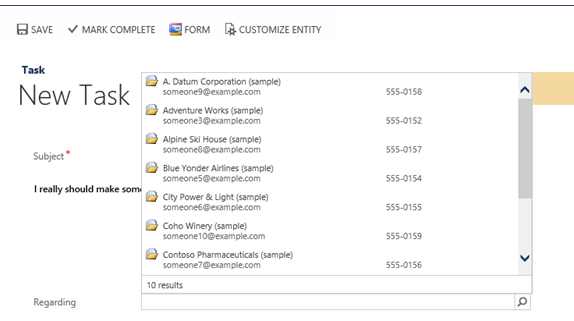 If I wanted to lookup a Case record instead, I can scroll to the bottom and select Lookup Records which will display a lookup box to select a record in the system. Note that this lookup box is NOT displayed in a separate browser window. 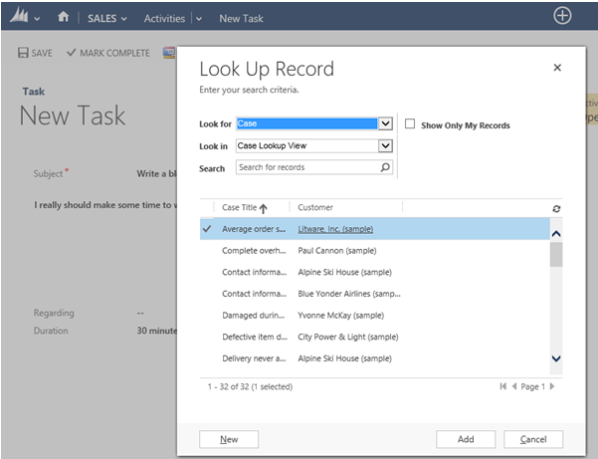 Now that I have saved the form, let’s go back to the command bar. I mentioned earlier that it is contextual, so we are now provided with more options after the record is saved. This is a great way to prevent curious users from clicking on buttons when they shouldn’t be doing so.

This post only covers a simple scenario with the Task entity, but many forms in the system have complex layouts and controls. For example, there is the process control, Bing Maps control, collaboration controls (Activities and Yammer), and “quick-edit” forms. I will be covering these in later topics.