As a part of this series on creating Power BI reports for a Microsoft Dynamics CRM Online Organisation, I demonstrated in my previous blog how to expand the opportunity_customer_accounts relationship column in AccountSet. After being expanded however, an error occurred when the updated AccountSet was reloaded to the Data Model.

This could be resolved by adding AccountId to the Removed Columns step of the Applied Steps. The following screenshot shows how this can be done manually using the Advanced Editor. However, this would have the side effect of also removing the AccountSet.AccountId to OpportunitySet.ParentAccountId relationship previously added to the Data Model. 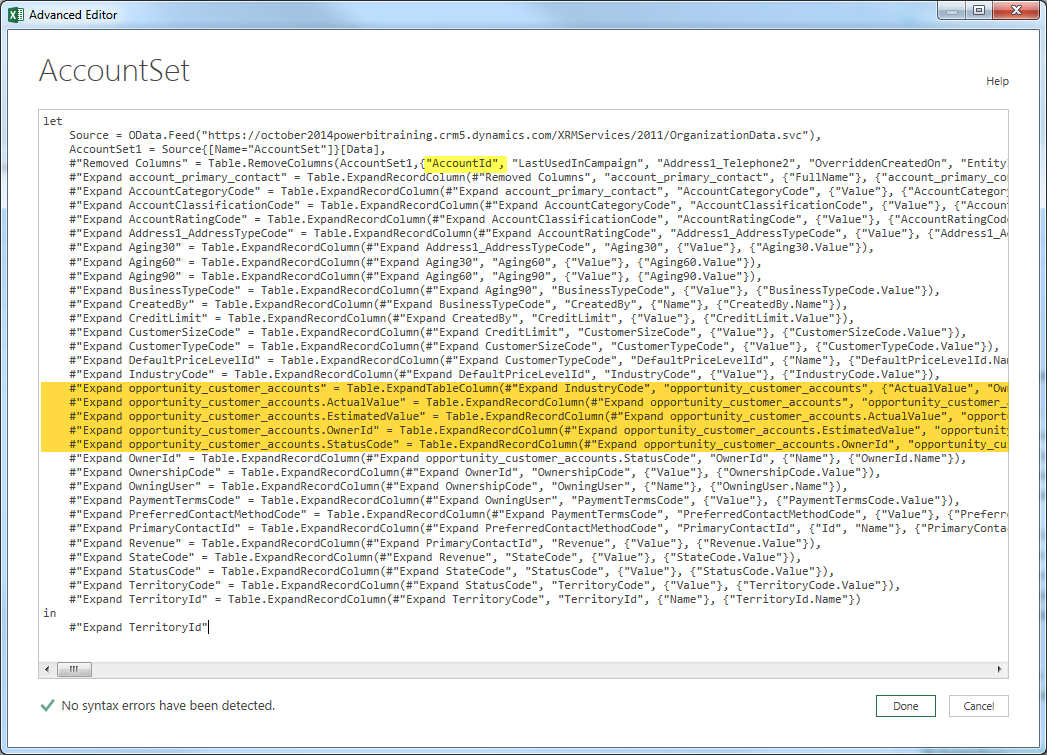 Therefore, my solution was to:

3.  Add a new copy of the AccountSet, retrieved from the Microsoft Dynamics CRM Online Organisation, to the Data Model.

4.  Use the Advanced Editor to copy and paste all the Applied Steps, except for the Expand opportunity_customer_accounts steps, from the AccountOpportunitySet to the AccountSet taking particular care not to include AccountId in the list of removed columns in the new AccountSet. Refer to the following screenshot. 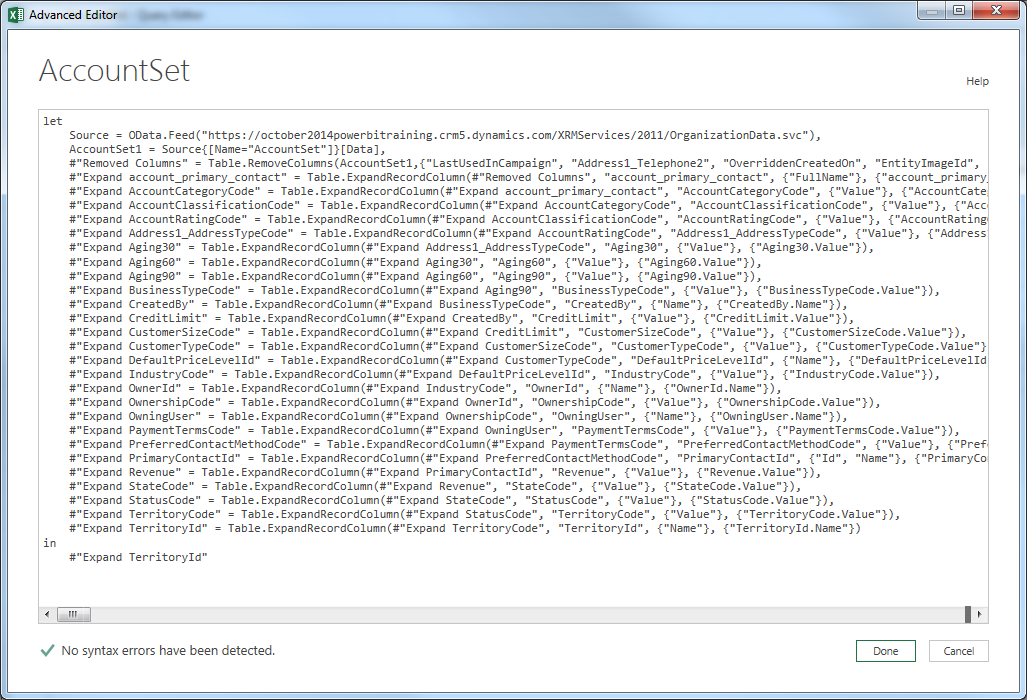 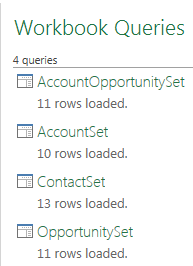 My intention is to have a useful set of ODataSet queries that may be used singly or in combination for building reports using the Power BI tools in Microsoft Excel such as PowerPivot, Power View and Power Map.

A final point in this blog, is that the difference between the relationships defined between ODataSets in the Data Model and those used when a Parent/Child relationship columns within a specific ODataSet is expanded is: 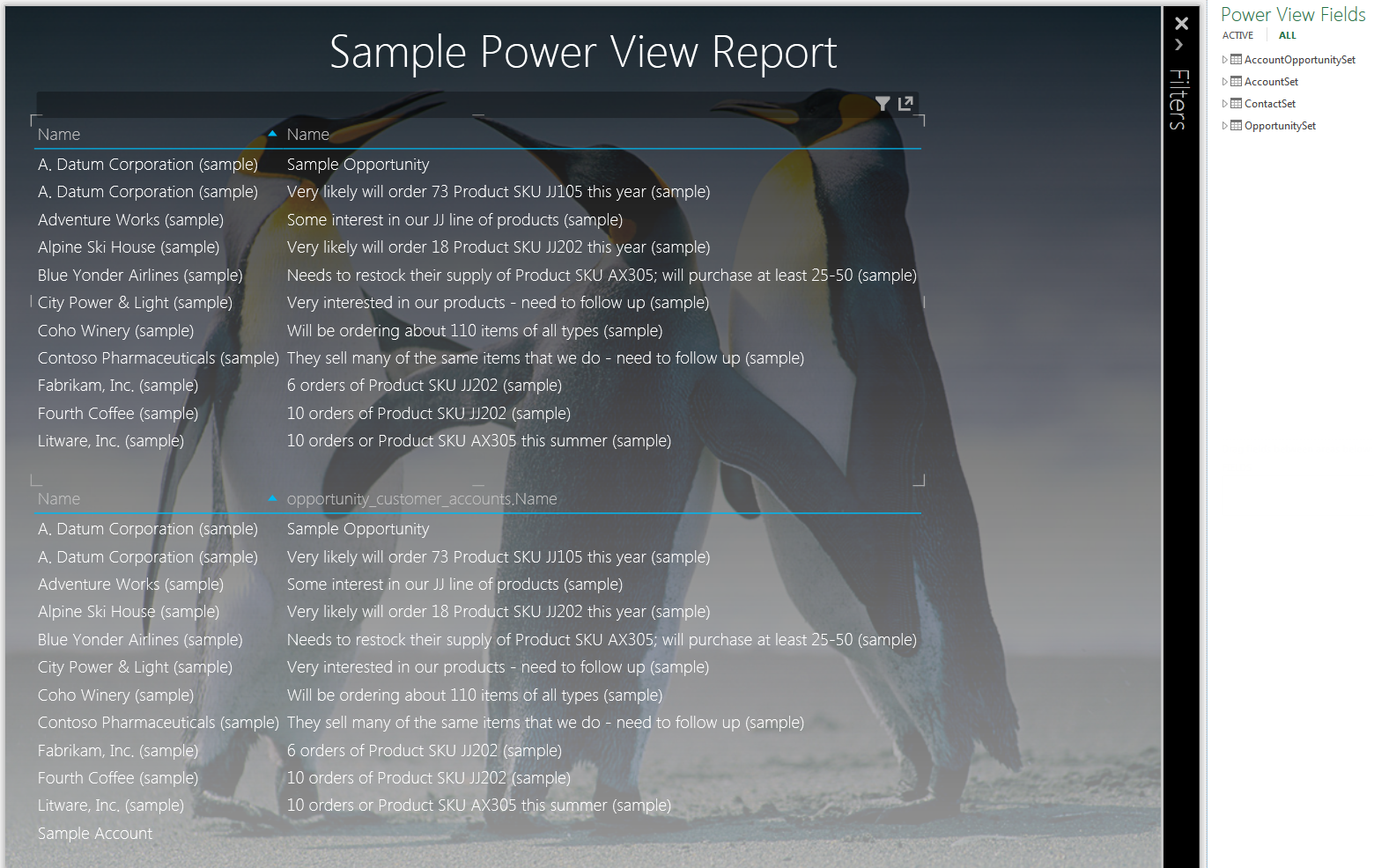 In my next blog I will demonstrate the steps for reducing and sorting rows in the ODataSets using the Power Query Editor. Once the design of the ODataSet queries are completed we can share them with others in the Power BI portal and we can use them to build Power BI reports.